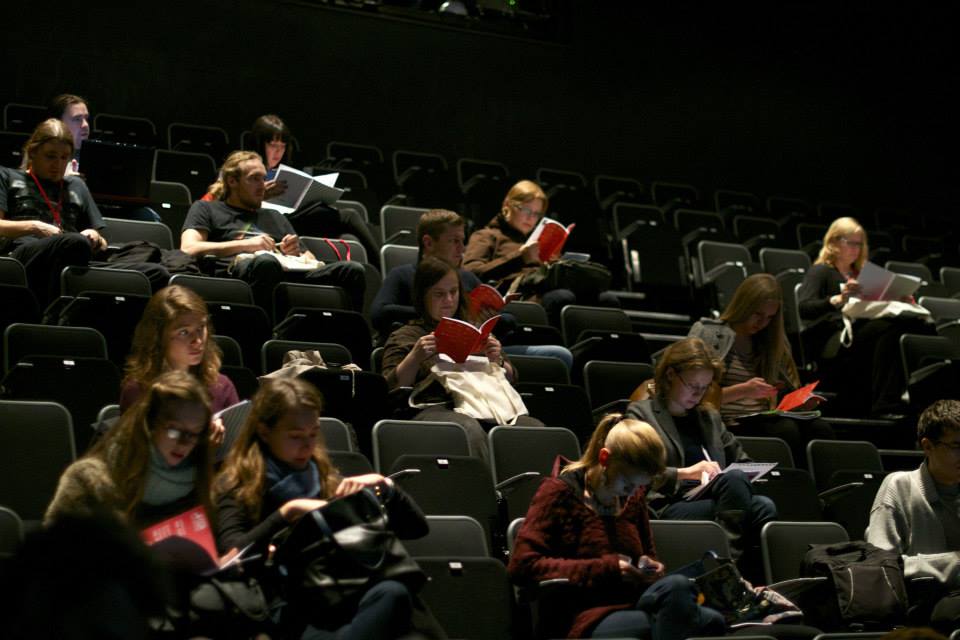 Held as part of the Vilnius Film Shorts, the Baltic Pitching Forum (taking place between 11th and 12th October) gathered filmmakers from Estonia, Latvia and Lithuania to pitch their forthcoming projects to a panel of industry experts. The event of was organised by Lithuanian Shorts in association with 2Annas Short Film Festival in Latvia and Sleepwalkers Student and Short Film Festival in Estonia.

The Baltic Pitching Forum consisted of one-day pitching training and one-day pitching sessions of the selected projects alongside one-to-one meetings with film professionals from all over Europe. Nine projects were gathered at the Forum with the promise of one team being selected to go forward to take part in the prestigious Euro Connection pitching sessions at the forthcoming Clermont-Ferrand International Short Film Festival in February 2014. During the two day session the Industry professionals – consisting of such luminaries as Laurent Crouzeix from Clermont-Ferrand and Sirkka Möller, coordinator of the Berlinale Talent Campus project development lab Doc Station – helped guide the attendees in both ideas about how to pitch projects and also with advice about how to move their short film projects further.

The pitch successfully selected to go Clermont-Ferrand was Edina Csüllögi´s film ‘The Butterfly-Man’, a project from Estonia.  Based on a short-story by Estonian author Mehis Heinsaar, the film promises to be a fantastic yet poignant tale of a man who explodes into butterflies every time he feels extreme emotion. The panellists and observers were impressed by its elements of magical realism and the passionate and humorous pitch from Csüllögi and her producer Kristo Jürmann.

Edina Csüllög, the director of The Butterfly Man said:

“I think each story has an own soul and energy. Each story has to be born and I believe that ‘The Butterfly Man’ wants to be born and we (meaning us and the story itself) had a great chance in the Baltic Pitch Forum to have a kickstart and be sure that this story has to be done. We got loads of good advice on how to make the story right and how to avoid it going wrong. I felt really good in the forum as I felt that each of the tutors, participants and panellists were listening to what you were saying and they were really helping. They were enthusiastic and very professional. I am proud and thankful to everybody who helped us and my special thanks go to Urmas Reisberg – the scriptwriter – and Mehis Heinsaar the writer of the original great short story on which the film is based.”

The aim of the Baltic Pitching Forum was to create a space where film directors and producers can present their short film projects in order to attract active European producers, TV commissioners, fund representatives, VoD programmers and distributors.  The forum also hoped to bring Baltic filmmakers – sometimes seemingly hidden away from the rest of their European colleagues – more to the attention of the industry in Europe.

“We’re delighted that an Estonian project was selected to go on to Clermont-Ferrand – perhaps the biggest Short Film festival in the world today – and to represent Baltic filmmakers. But we’re even more delighted in being involved with a project that has managed to enthuse so many filmmakers from the Baltics. I saw a great number of filmmakers networking and coming away from the event with some great advice and brimming with ideas for the future. We look forward to seeing all the projects developing in the future while also planning how we can organise the next Baltic Pitching Forum and make it even bigger and better than last time,”

You can find out more information about the Baltic Pitching Forum – including full details of panelists and projects – at https://filmshorts.lt/en/baltic-pitching-forum/